Thus, this time round I will be writing about Tiong Seng Holding Limited (Tiong Seng), which I had been vested since the start of the year at a very low price of only $0.230. It has since risen till the current price of $0.320. A whopping 36% paper gain! 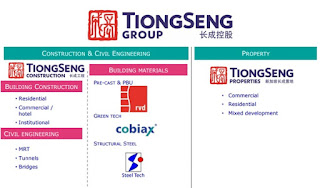 Riding on over 58 years of strong track record, Tiong Seng is a homegrown leading construction and civil engineering company in Singapore and a niche real estate developer in China.

Accorded the highest A1 grading from the Building Construction Authority (“BCA”) for both general building and civil engineering projects, the company is qualified to undertake public sector construction projects with unlimited contract value. It is also the first construction builder in Singapore to receive the prestigious Singapore Quality Award (SQA) in 2013.

Tiong Seng believe in addressing clients’ needs by combining the discipline of meticulous project planning and management through the systemisation of innovative building solutions. Over the years, the company have constantly invested (and re-invested) in its suite of construction technologies in order to stay ahead of the curve.

As a result, the company becomes the pioneering experts in state-of-the-art capabilities such as pre-cast, prefabrication, Building Information Modeling (BIM), advanced formwork systems, and Cobiax. With the growing emphasis on construction site productivity, Tiong Seng believe that sharpening its competitive edge will enable them, to not only transcend above their peers, but also combat the market headwinds.

Before we look at the pro and cons of Tiong Seng, let’s look at how this counter fare against the scorecards (These scorecards are taken from the Fundamental Scorecard website that was launched recently) at a previous share price of $0.295:

Based on The Ultimate Scorecard: 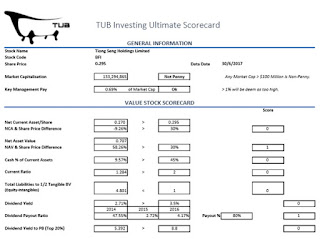 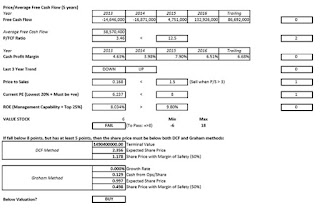 Despite the Ultimate Scorecard saying Tiong Seng is not a value counter, it still gave the counter a “Buy” rating at the previous share price of $0.295 via the alternative valuation method. This is most probably due to Tiong Seng amazing ability to generate cash! This is further emphasized via the low P/FCF.

Another margin of safety is that the discount it has against its NAV.

Based on Full Analysis: 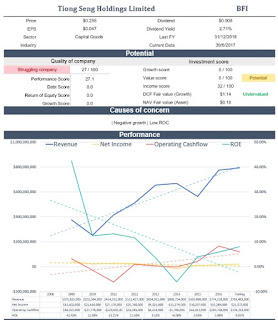 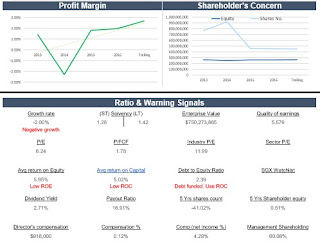 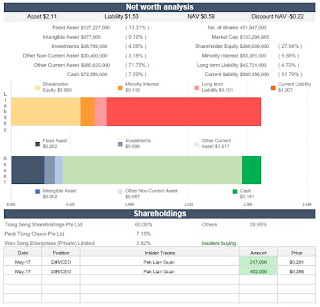 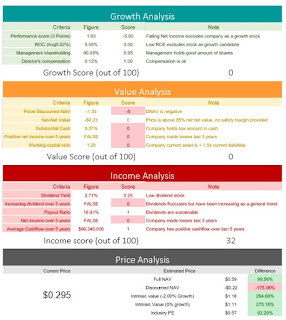 However, if you follow the Full Analysis report above, Tiong Seng is not a good counter to invest in.

Nevertheless, it is good to point out that the price analysis does explain that its intrinsic value is still far away from the share price of $0.295 at that point in time.

Any other positive factors on the company?

1. State of the Art Technology

As explain in its profile and if you read about Tiong Seng, you will notice people will talk about its technology abilities. I remembered, when it IPOed, one of the main attraction was Tiong Seng ability to innovate and develop its technology.

However, it is also important to note that Tiong Seng MUST continue to innovate its' technology. If not, it will eventually fall behind.

Despite the company giving out low dividend (a dividend yield of less than 3%), it returns its' shareholders via share buyback. As stated on one of the InvestingNote thread, the company had made more than 94 times of Share Buy Back since Sep 2015.

As per the latest quarterly financial report, the company still have an amazing $700 million worth of order book.

Tiong Seng has a 30% stake in the property development, Goodwood Grand. This development will be completed in Dec 2017. It was purchased for $141 million by the consortium. Up till now, according to URA cavaet, 37 units (out of 73 units) amounting to $89 million has been sold and registered.

With Tiong Seng's 30% stake, its possible revenue gain next year once the project is completed and fully sold = $59 million!

This year, one of Tiong Seng’s subsidiary has established a 60/40 joint venture with one of Ocean Sky International Limited subsidiary. The joint venture had purchased 2 land banks:

- 2 sites at Jervois Road with a combined site area of approximately 1,246.3 square metres and zoned “Residential” with a gross plot ratio of 1.4.

- Sloane Court Hotel at 17 Balmoral Road which is located in prime district 10, with a combined site area of approximately 3,617.9 square metres and zoned “Residential” with a gross plot ratio of 1.6.

This will definitely boost its balance sheet in the near future, while investors wait for a more few years before the recognition of the revenue and net profit take place.

But what are the risk involved?

One of the most significant risk is Tiong Seng’s high liabilities figure. Despite the company paying down its interest-bearing loan since 2016, it is important to note that the total liabilities figure is still huge.

If we compared its total liabilities to equity ratio with other established construction counters in SGX (chosen due to its similarities in business model and based on its latest quarterly financial report):

Tiong Seng has the highest total liabilities to equity ratio. Hopefully it will start to reduce its liabilities soon rather than later.

Another risk that may have went unnoticed is its business dealing and properties development in China. I have already seen too many China scandals floating within the SGX. Thus, I always have a negative outlook on companies with major developments in China. At the back of my mind, I will always ask myself if these deals are legitimate and if the cash can be “found”.

Tiong Seng seems to be a growth counter rather than a value counter. Although the company is growing, but it is also managing its balance sheet with a significant pay-down of the interest bearing loan since last year. The company's future also seem to be bright with its' JV recent purchase of  2 other land banks. The only question is will its share price drop if its share buy back stops?

Do note the author is vested in this counter/company at $0.230.

If you are interested to subscribe to know more about The Ultimate Scorecard or Full Analysis, do visit Fundamental Scorecard website for more information! Sign up to get the latest scorecard of all the SGX counters now!