Showing posts from June, 2022
Show all

June 20, 2022
Recession/Stagflation is Coming!  First and foremost, I believe I was wrong when I stated that there is no recession .  But what exactly is a recession? How do you know a recession is on its way? Negative growth for 2 quarters? Do you understand what a recession is? Have you tried applying for jobs for more than a year and still have no work, and you need the government to step in to ensure that there is at least 1 job that is sponsored by them and only pays S$2k for 1 year? I DID. In addition, I had to pay my tuition loan at that time ON MY OWN.  So really, I don't think many of you understand recession at this point. Ever Been Thru the Cycle where Oil went from $4 to $20? Yes, clearly someone did, and the message was relayed to me. I was advised to SELL EVERYTHING. The war is mostly to blame for the rise in oil prices. Even after the war is over, oil prices will remain high due to sanctions. This will lead to ongoing inflationary pressures and, eventually, higher interest rates.
Post a Comment
Read more

This is infuriating. Seeking Alpha has rejected my article yet again. So, if I post about the same company again, it must be a quarterly update or justified by a change in the firm's story or my investment thesis. But, unless I'm trading, why would I update the story or thesis on a quarterly basis? My main motivation for writing this article was to reaffirm my opinion on the company now that the price has dropped substantially, and to address points that others may have overlooked. Feedback from SeekingAlpha So, once more... I'll post the article here for everyone to read (my 16th article on Digital Turbine as per my 10x Potential Series ) . Please aid by liking and sharing till SeekingAlpha understands my grievances. I worked on this article for several days. I also hope this helps to keep investors calm in this harsh market. Enjoy! Investment Thesis This is a follow up to my post on Digital Turbine (APPS). Since then, the share price has dropped 54%, doubts over Digital
2 comments
Read more 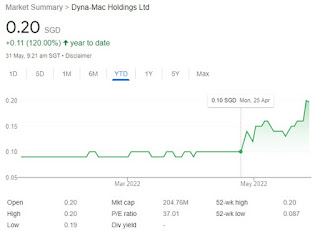 Not Vested in Dyna-Mac and BEZ at time of writing. Since April 25th, the share price of Dyna-Mac has increased by about 100%. According to the article , this is most likely a record high net book order of S$641.1 million for floating production, storage, and offloading vessel topsides modules (FPSO), with deliveries extending through 2024. Share Price of Dyna-Mac This is related to the oil supply scarcity > resulting to an increase in oil prices > increasing the demand for oil exploration/storage/transportation > leading to higher demand for FPSO. This prompted me to conduct research on the FPSO industry, which led me to Beng Kuang Marine (BEZ) , whose share price has been declining instead. This made me wonder if this is an opportunity? Share price of Beng Kuang Marine BEZ Latest Press Release As quoted from the latest press release, BEZ has four key business divisions as follows: 1. Infrastructure Engineering (“IE”) –Providing a spectrum of turnkey engineering services from
Post a Comment
Read more
More posts