November 21, 2017
When a company engages in a RTO exercise, it is not necessary a cashing out opportunity for the new owners. To them, it may be just a valuating activity.

Normally for RTO, you will hear the "circus" behind the team. There will be quite a lot of news on them so people will know this counter and push up the share price.

But what happens if the RTO doesn’t have any "circus", especially on the fact that it is so hard to find information on the company that is intending to take over the listing? Does this meant that it is some sort of shady business? What is it all about?

That’s when the investigator in me came out.

Recently, I got caught in this mode when I wanted to invest in a company that is currently in a RTO exercise now. The propose RTO has not been completed. Thus, I will not be stating the company’s name. I will just name it “ABC”.

Nevertheless I will be putting up information on this page which are public information on SGX and the net, which you may straight away know which counter I am talking about.

In addition it is also IMPORTANT TO NOTE that ANYTHING WRITTEN HERE IS BASED ON MY ASSUMPTION. I MAYBE WRONG AFTER ALL SINCE NOT ALL INFORMATION ARE REVEALED.

So what has happened?

Here are some abstract from the announcement: 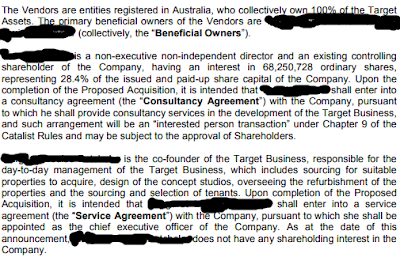 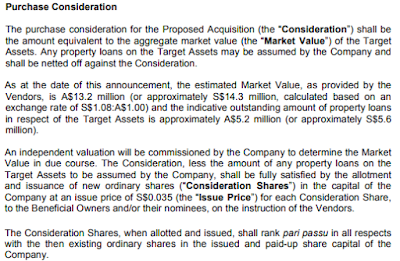 
What I found out:

Googling the 4 companies name and I found out about this - http://www.fifthavenuelifestyle.com/

In fact, this website totally tallies with the information above.

Its business is in Brisbane and it is renting studios to the entrepreneurs within the wellness and beauty industry in Brisbane starting at A$295/week.

From the website, you can also see the locations for the 3 commercial properties. From the people whom travelled to Brisbane before, they stated that these are suburb area catering to the neighborhood.

In addition, I emailed the company on 16 November and they replied me through a 3rd party agent on 20 November.

Extract of the email is below:

Here are my thoughts:

3. Brisbane Property yet to fully peak.

4. The website seem to show that the company is expanding. The extra properties will most probably come from the companies in the RTO exercise.

5. The issue share price is $0.035. This is about more than 20% premium about the current share price range.

2. The existing director will become a consultant – So he can cash out and say bye bye? This does not make sense to me.

3. The number of consideration shares are not stated. In addition, it seems to suggest that the RTO will release new shares into the market and not a conversion of existing shares. It sounds more like a rights exercise. Dilution?

4. The market value is an estimated figure and the exchange rate used is rather high.

5. No moratorium period stated. Existing directors can sell off anytime.

6. Why was the email replied via a 3rd party agent? – Extra cost, lower profit margin!

I have 1000 shares of this counter. But the total value of these 1000 shares can only buy you a few set of McDonald's meal. If you had followed me, you will know which counter I am talking about.

Although I am vested, but with all the negativity I have stated, I will not be adding to my holdings. I prefer to allow the RTO to take place first and see what is actually happening behind the scene.

Lastly I will end of with these words below…

If you are interested to know more about The Ultimate Scorecard or Full Analysis, do visit the Fundamental Scorecard website for more information! Do sign up to get the latest scorecard of the SGX counters now!