The New Idea That I Didn't Act On It

Having sold off one of my biggest holding of a Big Idea (Big Idea 5 - HongKong Land), I started search for the next possible Big Idea.

Firstly, I was looking at Courts Asia. But before I could make a decision, Nojima made a general offer. Damn!

Then along came Avi-Tech Electronics Limited (Avi-Tech). To be honest, I first came across this company when it passes Ultimate Scorecard in January.


I was surprised to see this new entry in my Ultimate Scorecard. This new company excites me in view that it was able to generate Free Cash Flow constantly for the last few years and the cash profit margin has been consistent.

What Does The Company Do?

The company specializes mainly in Burn-In Services, with a portion in Manufacturing and Engineering services. 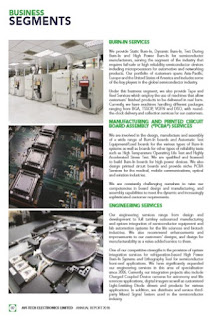 However, the fact that it passes Ultimate Scorecard now is due to its share price being on the downtrend. 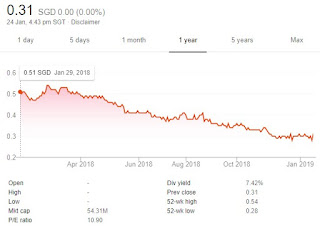 I believe it is due to the reasons below:

As per the RHB Analyst Report on 12 Sep 2018 and 2018 Annual Report, it has been reported that Avi-Tech's customers are in the automotive industry rather than the chipmakers.

RHB Analyst Report on 12 Sep 2018: "As Avi-Tech mainly provides burn-in services for chipmakers in the automotive sector, where there has been gradual and steady growth. We expect the burn-in business to continue to grow by 10-15% pa, and not be impacted by the slowdown in the
semiconductor sector. This is partly due to the fact that the majority of their burn-in customers are from the automotive sector, which is enjoying steady growth."

2018 Annual Report Letter to Shareholders: "...Furthermore, with the slowdown in the electronics sector, the overall semiconductor demand is anticipated to moderate. Nevertheless, due to the continued demand for sector-specific semiconductor chips such as in the automotive, cloud and networking  and data security industries, we are cautiously optimistic as there will be opportunities for growth for our business segments..."

In addition, as per a post on Valuebuddies on Avi-Tech, it has been stated by a CIMB Research Report that the customers of Avi-Tech are not within the chipmakers industry.


Thus, with the above understanding of Avi-Tech's customer base, the downward impact to Avi-Tech's revenue and net profit may be less affected than other similar companies within the same industry.

I had also reviewed the last 5 years of revenue and net profit for each different segment. 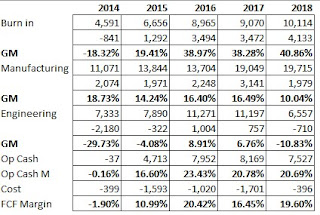 The results shown that the company's burn-in services generated the biggest gross margin but the engineering services had dragged the Avi-Tech's business downwards. In the event, the company continues to concentrate on the burn in segment and maintain its relationship with this group of existing customer, Avi-Tech's revenue and net profit could rise back up.

With such deep understanding of Avi-Tech's business, it is important to come to a decision of whether I should make the purchase of the shares at the current share price.

Eventually, I decided NOT TO make the new purchase due to the information below:
Basically, from the information above, it seems that the major customers had been paying in cash, since revenue from top 2 customer has maintained but trade receivables has decreased significantly.

Furthermore, the Engineering Business will continue to drag the business for another 3 to 4 months and this will continue to impact its bottom line. With that, its Price to Earning Ratio will increases significantly and I believe its dividend payout will also be affected.

Therefore, I believe Avi-Tech should be on my watchlist, while I await for a higher margin of safety.

Nonetheless, it is important to note that this is just my analysis as each investor should still make their own decision.

Please do your own due diligence before you invest this counter.

If you are interested to know more about The Ultimate Scorecard, do visit the Fundamental Scorecard website for more information!