Vested with an initial share price of US$7.25 and an average share price at US$6.81 (including premiums over 10 options)

Read till the end to know the name of Company 8.

After my last blog post, there seem to be more people asking about <Company 8> rather than <Company 6>. Maybe because 8 means 发 (Fa/Huat/Prosperity) in Chinese?

Thus, for this post I will be revealing Company 8 first and it will be called “8” in this post.

Part 1 – What the Company Does?

As per Seekingalpha, “8 operates as a cryptocurrency mining company in North America. The company engages in industrial scale bitcoin mining operations. It also owns and operates 38 BlockBoxes in Drumheller, Alberta; and 56 BlockBoxes in Medicine Hat, Alberta. The company is headquartered in Toronto, Canada.”

Yes – it is a crypto-mining firm and an industry I had specifically chosen.

This is because there was still no ETF on cryptocurrency and I cannot buy Grayscale BTC on Tiger. Furthermore, I am too lazy to go through the process of buying and holding bitcoin.

Part 2: The Segment of Fundamental Scorecard That Caught My Eyes

Fundamental Scorecard is a visualization tool that simplify all quantitative information into graphs while calculating the intrinsic value using timeless theories, and providing conclusions about the company for the reader to have an easier time to make decision. (If you are interested, do click on this link). 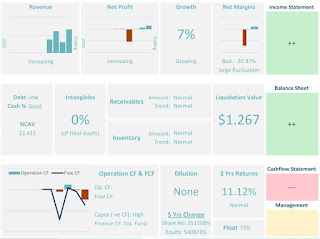 The company has just been uplifted to the Nasdaq not long ago. Thus, it does not have 10 years of financials. However, what caught my eyes is definitely the increasing revenue as well as the increase in net profit, along with a strong balance sheet.

1. 8 is a bitcoin mining firm that HODL its self-mined bitcoin. It is also the top company that hold on to the most self-mined bitcoin and is probably in 2nd place for holding onto the most bitcoins among the bitcoin mining companies. As of Sep.30, total bitcoin balance held in reserve stood at 4,724. This definitely appeal significantly to me since I want to hold bitcoin but lazy to get the set up the process.

2. 8 uses gas, wind and green energy to mine their bitcoin. No coal is used. Green energy is an important factor for bitcoin mining firm currently.

3. On expansion, 8 also has a partnership with Validus Power Corp for a supply of an additional 100mw. This agreement is unique as it looks at capturing waste gas or flare gas. As stated in the press release, “…The agreement includes significant optionality…if the Company decides to scale beyond the first 100MW. The anticipated commercial operation launch date of an initial 35MW is early Q4, 2021… A portion of the energy production for the project will be generated from captured waste gas and converted to electricity by leveraging cutting-edge mobile power plant solutions to be provided by Validus Power Corp…”

5. Their structures which are deem to be “BlockBoxes”, which as explained can be removed and placed anywhere with energy to spare (This also explains why they can use captured waste gas as a source of energy). This is unique within the bitcoin mining industry where many have to focus on purchasing a building or build one where its close to the source of power.

6. In my opinion, 8 is also very innovative in terms of their business model. It works with Genesis Mining and Galaxy Digital to earn yield on their Bitcoin reserve. This kept them afloat during the pandemic. 8 also works with Luxor Mining to mine ethereum and get paid in bitcoin. This will significantly reduces their cost of mining.

7. Bitcoin mining is very competitive and bitcoin is a finite commodity. With rewards halving every 4 years, I believe bitcoin mining might become less profitable moving forward (probably in after 2024) and having different sources of revenue is important. Therefore, other than earning yield on its bitcoins, the company also has a White label hosting business.

8. Finally, my opinion is that 8’s Management seems to be very PR friendly and transparent - just look at their Twitter and all the interviews in Youtube. This provided significant information for the investors on their business model and future outlook/developments.

9. The main risk that I foresee is that HODL on Bitcoin and not selling them meant that cash will eventually run out. Investors will have to be realistic and expect 8 to have share offering when their liquidity runs low.

With that I will reveal that Company 8 is actually Hut 8 Mining! It is really coincidental that its in the 8th position in my portfolio!

If you are interested, please do bookmark this Blog or follow me on TUBInvesting FB, or Fundamental Scorecard Telegram Group (please google for the links!).