Vested In This Marine Counter!

March 19, 2017
(I wanted to do an extensive post on this counter. But the sudden rise in its share price make me feel that I should just post what I know first.)

Although I dismissed this idea straightaway, but I still decided to look through the company in the marine industry to see if I can find any good counters to invest in.

The search led me to Samudera Shipping Line Ltd. 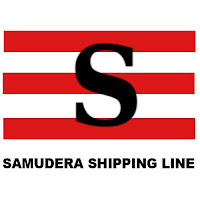 Profile In Short (Taken from Website and 2015 Annual Report)

Samudera Shipping Line Ltd (Samudera) is engaged in the transportation of containerized cargo, gas, liquid and bulk cargo in the Southeast Asia, Indian Subcontinent, as well as the Far East. The Group’s services are offered through three key business segments, namely,
i) Container Shipping;
ii) Bulk and Tanker shipping; and
iii) Freight and Logistics to complement their vast shipping network.

Samudera’s history can be traced back to 1988 when its parent company, Samudera Indonesia Tbk PT (A listed firm in Indonesia), started a feeder service between Jakarta and Singapore. From that humble beginning, Samudera has since developed an extensive network of container shipping services, with offices currently based in Dubai, Mumbai, Kolkata, Chennai, Bangkok, Ho Chi Minh, Klang, Jakarta, Shanghai, and Singapore.

Samudera’s Container Shipping business offers reliable feeder services between its “hub” port in Singapore and other “spoke” ports in Asia, as well as interregional container shipping services to manufacturers, exporters and importers. As part of the Samudera Indonesia Group in Indonesia, Samudera taps the marine and land transportation support capabilities of the parent company, a synergy that allows the Group to provide value-added services to its customers.

Samudera’s operating fleet, which comprises vessels owned by the Group as well as those on operating leases, currently stands at 43. This consists of 30 container vessels, 2 oil tankers, 5 chemical tankers, 2 gas tankers, 2 marine offshore support vessels and 2 dry bulk carriers. The Group continues to renew its fleet by disposing, acquiring and leasing vessels where appropriate.

As per above, the counter failed the Super Scorecard.

1. Occupy and own 2 levels of 6 Raffles Quay

Samudera owns 2 levels of 6 Raffles Quay. These 2 levels should be the "freehold properties" stated within the Properties, Plants and Equipment and the figure is stated at COST at US$6.5 Million.
This is supported by the Samudera's valuebuddies thread as well as an announcement made in 2006.

In other words, these freehold properties stated in the PPE should be worth around S$56 Million - estimated to be US$40 Million.

As per the super scorecard, the price to free cash flow is 2.84 times. That is amazing low!

In addition, just look at the Cash Profit Margin as per the picture above. This is due to Samudera having a high depreciation figure yearly due to the number of vessels it has. Thus, its cash profit margin is significantly much higher than its net profit.

As per announcement, Samudera has already taken into account the losses related to Hanjin bankruptcy. Therefore, this issue will not have a major financial impact on its future financial report.

In addition to the above Hanjin news, the management has also taken action to reduce the future impact by selling 6 of their vessels.

5. Share Prices at near 52 weeks low as well as near 5 years low 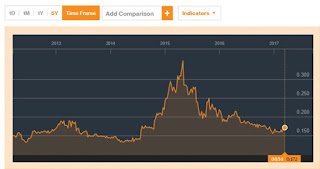 Samudera Shipping Line Ltd is 65.8% owned by Samudera Indonesia Tbk PT. There is a possibility that the company will continuously to request dividend from Samudera. This will also benefit the minority shareholders.

But there are also some issues...

1. Revenue has been dropping over the last 5 years

It seems that the downturn of the economy in Singapore and the drop in exports level has affected the revenue.

Will the revenue go back up? This will really depends on the Singapore economy and exports level.

2. Bulk and Tanker shipping has been on a downtrend.

Despite benefiting from low oil prices, it has also affected the company bulk and tanker shipping. This will also depends on how the management steer the company out of this segment.

Despite the negativity which may have been significant, I believe Samudera ability to generate high cash profit and free cash flow will reduce the impact of these negativity. Furthermore, if we take into account of the valuation of the 2 levels of 6 Raffles Quay, the net asset value should have been at least 50 cents.

But obviously, my target price is not so high. If the share price manages to reach half of the net asset value, it will be amazing!

Do note the author is vested in this counter/company at $0.173.

Anyway, for those interested in getting and understanding a bit more of the Super Scorecard or my methods of investments, I will be having a short paid seminar on 25th of March. All participants of the seminar will be able to receive the Super Scorecard.