I Purchased This Counter At Last!

April 06, 2017
Recently, rather than bottom fishing for counters, I decide maybe I can try to find the next counter that has the possibility of doubling in share price within the next 2 years. I had a few good picks in the past, such as PNE Industries Ltd, Hock Lian Seng Holdings Ltd, Ellipsiz Ltd and Captii Ltd, that has gain significantly - doubling or almost doubling in share price over a 2 to 3 years period.

One of the counters I come across is Japan Foods Holding Ltd (deem as JF for the remainder of the post below).

This was a counter I had been eyeing for the longest time. This counter is like the restaurant you never entered before, even though you walk past it everyday and know it serves very good food and has been wanting to try their food. But you just find the price a bit too expensive.

In past, I already knew this counter has a great business model with a strong balance sheet. It also gave up great dividends. However, I didn't purchase this counter because its PE is always too high for my liking. Nevertheless, I decided to do a review on it and see if I should purchase the counter.

On the other hand, during my trip in Hong Kong, I saw a few of the Ajisen outlets and was trying to find out who owns them. I was wondering if it is JF. I eventually found out that these outlets in Hong Kong were owned by Ajisen (China) Holdings Ltd (deem as AC for the remainder of the post below) listed in Hong Kong stock exchange.

Since I have also started looking at counters in Hong Kong stock exchange, I decided to compare both of the counters to find out which one should I be investing in.

Profile of JF and AC

Katsuaki Shigemitsu, the President and Chief Executive Officer of Shigemitsu Industry since 1997, has been the non-executive director of the JF and AC since their respective listing.

Anyway I decided to use the Super Scorecard on both of the counter and here is the summary: 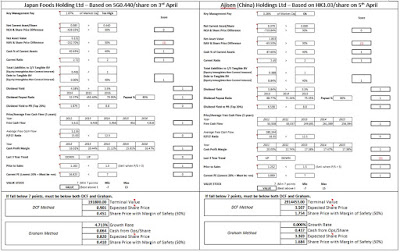 Both companies scored 7 pointers and have many similarities!

The main differences between the 2 companies are (1) AC has much lower PE (x 3.8) as compared to JF whose PE ratio is 16.8, (2) JF last 3 year trend is on an improving trend while AC is on a down trend, and finally (3) the alternative methods valued JF closer to its current price as compared to AC.

Nevertheless, I will deem that JF to have passed the super scorecard while AC failed it. This is because JF is a Singapore counter and AC is a Hong Kong counter. I will require Hong Kong counters to score at least 10 points in order to pass since it is a foreign counter (with currency risk) so I will want a bigger margin of safety.

(Do note that the counter I bought within Hong Kong stock exchange has scored above 10 points.)

As per AC’s 2015 annual report – “Pursuant to the Franchise Agreements, the franchise fees and technical fees are payable by the Group to Shigemitsu. The franchise fee is calculated with reference to the number of restaurants and the technical fee is an annual payment for the business of manufacturing and distributing noodles under the “Ajisen” trademark.”

As per JF’s 2016 Annual Report – “The royalty, franchise and licence fees paid to Shigemitsu Industry in FY2016 comprise: (i) fees paid for the use of the “Ajisen Ramen” brand amounting to S$341,000 (such fees relating to the “Ajisen Ramen” brand are deemed to have been specifically approved by Shareholders at the time of the Company’s initial public offering in February 2009 and are not subject to Rule 905 and Rule 906 of the Catalist Rules to the extent that there is no variation or amendment to the terms of the relevant franchise agreement); (ii) fees paid for the use of the “Keika Ramen” brand amounting to S$47,000; and (iii) the right to use the technique for the production of noodles amounting to S$18,000.”

Revenue per Restaurant (Based on Segment Results and solely from Restaurants, excludes manufacturing Income, rental income and sub-franchisee income)

With that, I will conclude that I prefer JF than AC, even through their franchise fee were more expensive, due to the following:
- JF has higher insider ownership.
- JF passed the Super Scorecard.
- JF owns more brands.
- JF's revenue per restaurant is almost twice that of AC.
- I do not even need to worry about currency risk!

But how about other F&B Restaurant Counters?

While comparing across all the F&B restaurant counters in SGX, JF did not fare badly. In fact, it score well - with the lowest PE ratio and the highest dividend. It is also not drastically overpriced in terms of PB ratio and it also has a very low Debt to Equity ratio.

Anyway I also decided to compare the revenue per restaurant for each counter. Do note that we are only comparing the Singapore restaurant operations and Singapore revenue since JF's revenue is mainly from restaurants in Singapore.

This is based on best effort basis - Mostly FY2016 Revenue:
*Chaswood Resources is ignored as there are no Singapore Revenue.

Nevertheless, you have to remember that JF has the lowest PE ratio (despite having a low Revenue per Restaurant)! This meant that JF is working very efficiently. Remember all the IPAD bookings on each table when you visit an Ajisen Ramen outlet in Singapore? Thus, if only the remaining counters review their operating expenses and worked as efficiently as JF, I will still prefer JF!

But why choose JF in a bull market and on an Up-Trend?

Other than all the information stated above, there is 2 more important piece of information. 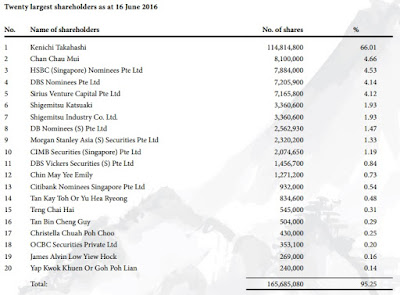 Furthermore, there is a new substantial shareholder (from deem shares) - Wong Hin Sun, Eugene - owning about 5.44%. If you compare via the annual report 2016, he only own 4.12% via Sirius Venture Capital Pte Ltd and 0.73% of Chin May Yee, Emily, whom is his wife. His recent increase in shareholding is due to his wife purchasing more shares. So why did his wife purchase the shares in Jan 2017 - at such a near time when they are announcing full year financials?

In addition, do note that Wong Hin Sun, Eugene WAS also a director for AC. But he left in Feb 2016. Why? Maybe to concentrate on his job in JF? Do note that he has also sold some Neo Group Limited shares in August 2016.

These questions led to to believe that JF will be announcing a very good year ahead and maybe more dividends.
However, there are some worries too. Other than the low Revenue per restaurant, the company also has a very high dividend payout (above 90%). Unless they maintain their dividend payout ratio, the share price maybe affected negativity. Moreover, JF's share price is very near 52 weeks high. If the market have some negative overall news (maybe due to Trump), the share price will be easily negativity impacted.

Despite the possible negativity, I decided to purchase the counter due to it passing the super scorecard, high dividend yield, high insider ownership, a high probability of stability in its share price, restaurant business model with numerous brands, clean balance sheet with significant cash percentage and finally a focus growth strategy.

Do also note that I deem this as a counter I expect to rise significantly and I will be holding on to it for 2 to 3 years.

Do note the author is vested in this counter/company at $0.440.