A Matter of Questionable Management

October 04, 2017
Singhaiyi Holdings Ltd (Singhaiyi) was a great call previously by me. I average upwards when it announces an exceptional Q1 2017.

However, its recent purchase of Sun Rosier is a bit hard to accept. There were explanations that their purchase price was too high. Nevertheless, I decided to hold on to them as I believe the management may have a different view.

But I realized Singhaiyi missed out reporting that it was awarded a public tender of a string of commercial units from OKH Global Ltd (OKH) when they were the only bidder.

For those that do not know, Singhaiyi and OKH technically are owned by the same parent company - Haiyi Holdings Pte Ltd.

This meant that this was actually a related party deal. From my experience, I doubt any related party deal will be fair to the minority shareholders. Furthermore, not announcing the "award" makes it looks like Singhaiyi maybe on the losing end.

To justify the deal, I tried looking into the announcement. But more questions follows. 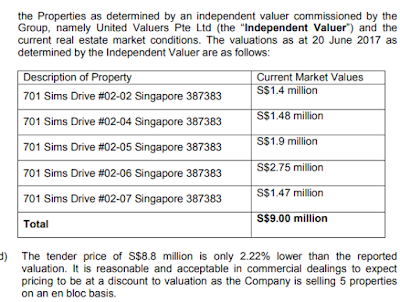 For the information above, without knowing the size of the property, how will I know the current market value stated in the report are reasonable?

Although there are ways to check the property size (like reading pass annual reports), but I just felt there was no need to. It just seems to me the management just wanted to hide some fact.

In addition, the following section gave me the facts to finalized my thoughts:

The purchase of Sun Rosier had already made me felt Singhaiyi will not be sharing the gains with us - the minority shareholders. Coupled with the lack of announcement of winning the public tender, these actions just made me uncomfortable holding onto this counter.

Nevertheless, it is important to note that the company may still have a good financial year 2017 due to the initial gains in Q1 2017.

But I just had too many questions about how Singhaiyi is being managed. Thus, I decided to just sell off all my holdings.

If you are interested to know more about The Ultimate Scorecard or Full Analysis, do visit the Fundamental Scorecard website for more information! Do sign up to get the latest scorecard of all the SGX counters now!