This Counter Flew Up Into The Sky!

Ocean Sky International Ltd (Ocean Sky) was a counter I bought on 31 Jan 2017. It is a micro-penny counter that went under a structure change at the end of last year. They change their business from manufacturing clothing to becoming a construction company.

I was a bit disappointed when Ocean Sky released its full year results for 2016 on 1st March 2017. Its net profit was boosted by “other income” – recognition of fair value gain on investment property in Cambodia, and its balance sheet has significant “goodwill”. In my opinion, these are just “air” fundamentally.

Nevertheless, I kept holding on to it because I believe the company will need to drive the share price up with business activities. Furthermore, this counter is rather illiquid. Share price move up and down significantly, but only due to small volume.

However, I realized the company started to announce the purchase of properties to develop since April 2017.

However, even after the news of the collaboration with Tiong Seng came up, nothing much happened to Ocean Sky share price.

It was at this time that I kept accumulating on Ocean Sky counter, even though I also have Tiong Seng.

Then on 27 Sep 2017 late night, Ocean Sky made the announcement of proposed disposal of the investment property in Cambodia. 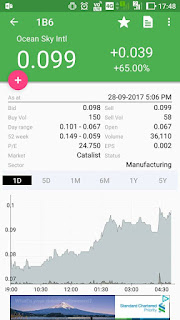 So what will happen to my Ocean Sky holdings?

Although I am VERY TEMPTED to just sell all my holdings, but I only sold down 45% of them. Right now, my average share price is about $0.058 (Yes, accumulation of an illiquid counter is very hard, that is why its not a very low price).

For the rest of my holdings, I will try to wait for the next quarterly financials to be announced around 14 November 2017 before deciding on what to do later.

Nevertheless, for those intending to enter at the high share price now, be prepared for the long winter.

Because when the news of the disposal of the investment property fizzle down, the counter may become illiquid again. The share price may most probably drop again and the next catalyst may only be from the collaboration's developments announcing its TOP many years later.

In addition, there is always the risk of the deal of the disposal of the investment property in Cambodia falling through.

So if you want to buy now, do think carefully. It is not that this counter do not have any fundamentals, it is just that you must have the ability to hold FOR A LONG TIME.

If you are interested to know more about The Ultimate Scorecard or Full Analysis, do visit the Fundamental Scorecard website for more information! Do sign up to get the latest scorecard of all the SGX counters now!