"This is the Gem I was talking about"


Previously, I had said that through the InvestingNote platform, I was able to find a gem from one of the thread discussion.

I had also talk about this company in another of my previous post.

In the past, I was very skeptical about this company as its ultimate shareholder, Wheelock and Company Limited, is located in Hongkong. I had some bad experience of holding listed entities (Top Global Ltd) with overseas parent company before. Thus, I was not ready to take the plunge then.

It was after some deep analysis and numerous reading that I decided to invest in this company.

Do note that this is not part of my dividend series.

Wheelock Properties (Singapore) Limited, formerly known as Marco Polo Developments Limited, was incorporated in Singapore on 19th December 1972 and listed on the Singapore Exchange Securities Trading Limited (SGX-ST) on 6th May 1981. Its principal activities are that of property investor and developer, with a focus on luxury residences. The company is a subsidiary of Wheelock and Company Limited, a major Hong Kong group whose core businesses are property and hotels, container port operations and communications, media and entertainment.

It is also in the mist of selling 3 developments in Singapore - Ardmore Three, Residences located at Scotts Square and The Panorama.

It is also developing an area(?) called "雍景山", sited at Fuyang City, which is 22 km away from Hangzhou, China. Construction of Phase 1, comprising four villas, 111 townhouses, 140 duplexes and 222 high-rise units, is in progress and it is expected to complete in 2016. (Not that I encourage or like companies that expands into China. I am treating this as a extra only.)

Based on Enhanced Triple S Scorecard with Dividend Scorecard Portion (Present Price of $1.465 as of 29 Nov 2016):

Yes, as per the pictures above, this stock fails the Enhanced Triple S Scorecard with Dividend Scorecard Portion.

Do note that I have always told readers/users that any company that fail the scorecards does not mean that they are lousy investment. It is just that the stock is not significantly undervalued. Furthermore, another way to use the scorecard is to see where does the company lack in and understand your risk if you intend to purchase it.

So why do I still deem that Wheelock Properties (Singapore) Limited as a Gem?

1. Net Current Asset Value is not negative, unlike the others developers that also has a share price of more than $1.

As per the comparison table below (shown in my previous post), Wheelock Properties (Singapore) Limited is the only company that has a positive Net Current Asset Value.

The reason for this is due to happen is because the company managed to pay off almost all of their DEBTS!

I have only come across a few developers without significant bank borrowings. Wheelock Properties (Singapore) Limited happened to one of them. In addition, it is important to note the company's ability to pay off so much debt even in this "not-so-good" economy.

Just to emphasize the reduction in the amount of liabilities and bank borrowings, here is the picture of the total liabilities in the latest financial:
3. Investment properties unencumbered

Another factor I have to emphasized is that since the 2015 Annual Report, I realise Wheelock Properties (Singapore) Limited's investment properties are unencumbered!

Normally, developers will leverage using their investment properties in order to increase their cash position, so that they can grow via purchases of land banks or start on new developments.

However, for this company, Wheelock Place and Scotts Square is actually not leveraged - Over $900 Million worth of Fixed Assets!

This also meant that in future if the company require to more cash, they can obtain significant bank loans using these investment properties as collateral.

Here is the evidence from SGX: 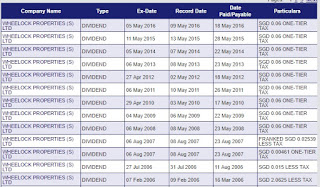 But what are the possible risks?

As of Nov 2016, it was explained that, in a website shared on InvestingNote that there are currently 53 units sold.

However, in Dec 16, do note that if Wheelock Properties (Singapore) Limited is unable to sell of all the units in Ardmore Three, it will need to pay QC charges!

On the contrary, some of us that calculated the QC Charges and expected it to be less than $5 Million - which should not hurt the company's financials.

2. High Possibility of Privatization and Delisting

Although delisting could be an interesting option, but it can also allow the purchaser to buy at a price that is lower than my purchase share price.

This will happen if the share price continues to be on a downtrend, the purchaser could provide an offer price that may end up lower than my purchase share price. Thus, we will need to consistently monitor and average down if necessary.

Although we understand that the Enhanced Triple S Scorecard with Dividend Scorecard Portion has failed, but from the above explanations, the company's balance sheet is strong, especially from a developer point of view.

Dividend Payout has also been rather consistent. Note that most developers' dividend payout is lumpy.

As per P/FCF, the company seems to be turning around. For Last 12 months PS and PE, I believe as the year end financial results are released, it should go lower - Based on the current price. These are most probably the risk I am taking on.

As for the dividend scorecard, it doesn't matter as of now. This is because my focus on this stock is more on the balance sheet and not the dividend.

Wheelock Properties (Singapore) Limited is in the same situation as Sing Holdings at that time when I bought the latter. But Sing Holdings was more valuable at that point in time - It was a Current Net Asset Value stock.

On the other hand, Wheelock Properties (Singapore) Limited maybe better as there is still room to grow in terms of financials. The company already have significant investment properties, which meant significant recurring income, and do not need to bid for any land bank at the moment (before they sell off all their developments).

Regardless, with the above advantages, the company seem to be a worthwhile stock to purchase now.

Do note the author is vested in this stock/company at $1.490.

For those who are interested in the Enhanced Triple S Scorecard, do not hesitate to contact me directly.